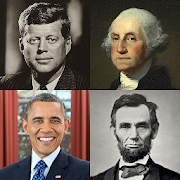 All 44 US Presidents in one app including current president Donald Trump who is serving as the 45th President (Grover Cleveland served two non-consecutive terms as the 22nd and 24th President).Can you guess Franklin D. Roosevelt and Abraham Lincoln? Do you know Ronald Reagan and John F. Kennedy? How did Woodrow Wilson look like? In version 2.1, portraits of all 48 Vice Presidents of the United States of America have been added. They include such famous politicians as Aaron Burr (the vice-president during the first term of Thomas Jefferson), Joe Biden (Barack Obama’s vice-president), and incumbent 48th Vice President Mike Pence. The brief info for each Vice President covers his term in office, political party affiliation (Democrat, Republican, or Whig), and under which US President he served.For example, John Adams was the 1st Vice President (under George Washington) and then the 2nd US President. So his portrait is in the both levels. Overall, 14 Vice Presidents subsequently became US Presidents either by winning the presidential elections or after the death or resignation of the previous president. Thus, John Tyler ascended to the presidency in 1841 after the death of William Henry Harrison, and Gerald Ford became the POTUS following the resignation of Richard Nixon. Try to find out all other examples!Choose the game mode: 1) Spelling quizzes (easy and hard).2) Multiple-choice questions (with 4 or 6 answer options). It’s important to remember that you have only 3 lives.3) Time game (give as many answers as you can in 1 minute) - you should give more than 25 correct answers to get a star.Two learning tools:* Flashcards, where you can browse all persons in the app without guessing. There are also links to the full bio in the encyclopedia.* Chronological tables of presidents and vice-presidents.Advertisements can be removed by an in-app-purchase.I strongly recommend this app to everyone interested in American History and Politics. You will learn all US Presidents including less known heads of the White House such as Millard Fillmore and Chester A. Arthur.