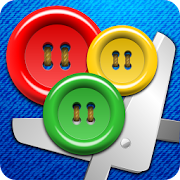 Cut off the sewing buttons in the logic game Buttons and Scissors! To cut off the buttons, select two or more buttons of the same color. You can select buttons only on the same horizontal, vertical or diagonal line. Cut off all the buttons from the scrap of denim to complete the level. Try to complete each level in the shortest time possible to get a better score.You cannot cut off a single button, so plan your strategy in advance! Buttons and Scissors is a fun way to improve your logical thinking and train your brain.Tutorial:When you begin playing the game for the first time, there will be a tutorial level. You will be presented with a scrap of denim and a number of different colored buttons. Each current move will be displayed as a white arrow. Touch the first button and move your finger to the last button of the same color you wish to select in that line, and then release your finger. All selected buttons will then be cut off with a scissors, if selected correctly.Main features:- Realistic sewing buttons and scissors- 5x5, 6x5, 6x6 and 7x7 levels- Unlimited Undo- HD graphics- Tablets are fully supported- Leaderboard- Saved Games- Solutions for levelsPlease support Buttons and Scissors and Like our page http://www.facebook.com/KyWorksGamesWe would recommend to connect the game to Google's Saved Games to automatically synchronize your game progress across multiple devices. Also, your game progress will be automatically restored if you uninstall and reinstall the game in the future. To connect the game to Saved Games, just click the "Sign-in with Google" button in the game.IMPORTANT: No real buttons were cut off in the making of this game!