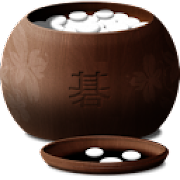 Play Go (weiqi, baduk) games online, tournaments, world championship - FICGSGoGame: Weiqi, baduk, igo ; chinese: 围棋, korean: 바둑, vietnamese: Cờ vây, japanese: 囲碁, russian: Го, french: jeu de Go- Instant Go tournament registration.- Automatic Go tournament creation.- Rated weiqi / baduk tournaments.- 2 players matches on the website only.- Free tournaments & world championship.- Real time countdown in seconds.- Replay the best Go games - Weiqi, 囲碁.- Graphical interface for each game: 바둑.- Email notification (own, opponent's moves).- Vacation (45 days per year).- Player baduk statistics, personal page.- Follow live weiqi games (rss available) 围棋- Full weiqi games database available.- Go baduk rating calculation in real time.- Moves by clicking pieces, plain text format.Go, also known as Weiqi or Wei'qi, Wei'chi in Mandarin Chinese (围棋, traditional chinese : 圍棋), and Baduk or Padhook in Korean, is a strategic, deterministic 2-player board game originating in ancient China, before 200 BC. The game is now popular throughout East Asia and on the Internet. The goal of the game is to place stones to control a larger board territory than one's opponent, while preventing them from being surrounded and captured by the opponent.Here you'll find hundreds of AGA or EGF (also Nihon Ki-in 日本棋院 & Kansai Ki-in or server IGS KGS) rated players from 21 kyu to 9 dan & masters from USA, Russia, from Asia (China, Korea or Japan), from Europe (France, Germany or Italy...) & all over the world. Most play by themselves but the use of Go engines like CrazyStone, SmartGo, Fuego or GnuGO and even artificial intelligence like AlphaGo / AlphaZero is authorized. When finished, games are annotated by joseki and may be commented by other players.The English name Go originated from the Japanese pronunciation 'go' of the Chinese characters. In Japanese the name is written 碁. The Chinese name Wéiqí roughly translates as 'encirclement chess', the 'board game of surrounding', or the 'enclosing game'.Note: There is no gambling at FICGS, there is no chancy game with entry fee & money prizes. It is not possible to entry a tournament with an entry fee via the applications.If you like this app, please give it five stars. Or please write to the author if you encountered any problem, we will be happy to fix it. FICGS is also on Facebook, you can like the pages and enter the groups to discuss it. You can find all FICGS apps at https://ficgs.com/Free_Internet_Correspondence_Games_Serverhttp://www.ficgs.com/weiqi-baduk_can.html