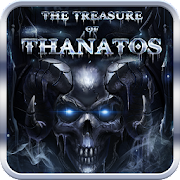 Skull Grim Reaper Theme is a new free theme among tons of horrible grim reaper themes. Skull Grim Reaper is a free theme specially designed for our launcher users, including dozens of cool metallic icons and horrible skull wallpaper/background, which can personalize your phones easily.If you are a fan of ancient Greek mythology, you won't feel strange of the macabre Grim Reaper. The macabre Grim Reaper (Death) is an Angel of Death. Death is an abstract being of god-like magical power. He is the embodiment of death and, as such, angels and other supreme beings/spirits often assist him.In the mythology wallpaper, the macabre Grim Reaper (Death) shows his horrible sharp teeth, and his eyes reveal light blue light, which looks very cool. The cool 3D weather widget function, 3D effects metallic icons and horrible skull wallpaper/background will bring your phones a brand new look. You can feel the mysterious atmosphere even through the screen. In English, death is often given the name the "Grim Reaper" and from the 15th century onwards came to be shown as a skeletal figure carrying a large scythe and clothed in a hooded, black cloak. The nickname Angel of Death, stemming from the Bible, is another name most knows this mythical creature by in some society mythology.🎁 Features:- Amazing 3D transition effects on screens and folders switching.- Elegant and simple 3D screen navigation.- Screen management interface with sense of space.- Cool skeleton 3D clock and weather widgets.- Dynamic display on All Apps alphabetical list, or “App drawer”.- Compatible with 99% phones device.- Very small, will not affect system performance.- Battery save function.⭐ Notice:Skull Grim Reaper Theme is only available for phones with our launcher installed.If you download the horrible Skull Grim Reaper Theme, you can enjoy:❤️ More variety themes/wallpapersYou can go to our theme center to look for more different kinds of themes here, you can find all sorts of theme categories, including anime, black, 3D, skull, pink, red, purple, love, white, blue, green, music, dragon, gold, cartoon, panda, girl, stars, artistry, people, football, wolf, graffiti, live, car, neon, cat, lion, joker, sports, tech, and has a large variety of HD Backgrounds/Live Wallpapers/Themes updated every day! You can find what you want here!❤️ More stylish live wallpapersWe are a creative team, and always make great efforts to create more extraordinary live wallpapers for you. We have made: cruelty flame tiger wallpaper, gold butterfly live wallpaper, skull live wallpaper, dolphin live wallpaper, horse live wallpaper, and many more in the near future.🍀 How to Apply the Theme:1. Download and install the Skull Grim Reaper Theme;2. Install our launcher;3. Start our launcher and then you can apply the theme you downloaded. If you already have our launcher on your phone, you can also directly go to “Themes--Mine” to open the Skull Grim Reaper Theme and apply it to your phone.For centuries death has been personified, perhaps to help people better understand and cope with it. The name of this personification: The Grim Reaper, otherwise known as Death. Reportedly the most common embodiment of the Grim Reaper is a tall, dark figure, clad in the black robes of a monk, with a pale or sometimes skeletal complexion, his hand grasping his scythe with which he reaps the souls of the living, often holding in his other hand an hour glass in which the grains of life flow. His eyes small glowing flames, or perhaps just empty sockets. In most Greek documents, mythology and stories he is portrayed as a bearded and winged man, or even a young boy. Death or Thanatos, is the counterpart of life; and is often represented as male, to the female image of life.If you like this horrible Skull Grim Reaper Theme, please support us by rating it.If you have any ideas or suggestions, contact us by email: [email protected], we are so happy to receive your valuable advice.