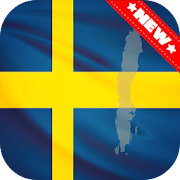 Attractive "Sweden Flag Wallpapers" HD for all citizens of Sweden! - Cool Latest Sweden Flag Wallpapers Graphics 3D Illustrations - Popular Top "Sweden Pictures" Photography Free Download! Sweden, Sweden (Swedish: Sverige formal name: the Kingdom of Sweden (Swedish: Konungariket Sverige ), is a Scandinavian Nordic country in Northern Europe. It borders Norway to the west and north and Finland to the east, and is connected to Denmark in the southwest by a bridge-tunnel across the Öresund Strait. At 450,295 square kilometres (173,860 sq mi), Sweden is the largest country in Northern Europe, the third-largest country in the European Union and the fifth largest country in Europeby area. The capital city is Stockholm. Sweden has a total population of 10.3 million of which 2.5 million have a foreign background. It has a low population density of 22 inhabitants per square kilometre (57/sq mi) and the highest urban concentration is in the central and southern half of the country.Sweden is part of the geographical area of Fennoscandia. The climate is in general very mild for its northerly latitude due to significant maritime influence. In spite of the high latitude, Sweden often has warm continental summers, being located in between the North Atlantic, the Baltic Sea and the vast Eurasian Russian landmass. The general climate and environment varies significantly from the south and north due to the vast latitudal difference and much of Sweden has reliably cold and snowy winters. Southern Sweden is predominantly agricultural, while the north is heavily forested and includes a portion of the Scandinavian Mountains.This app has a feature to mark any wallpaper as favorite with the Sweden Flag Wallpaper. You can even select to view or browse through these wallpapers using the Slideshow feature on the “Sweden Flag Wallpapers” app. We are sure that this app is better than Sweden Flag Live Wallpaper app.Pleasant Features of "Sweden Flag Wallpaper" Application: - Very user friendly and easy to navigate. - Enjoy best images of Sweden, and Sweden Flag collection.- Optimized battery usage!- Compatible with 99% of mobile phones and devices.- Supports all screen resolutions and devices (including tablets).- Set your favorite pictures as wallpapers or save them to Favorite.- Share your favorite Sweden Wallpaper pictures to your friends and family to Instagram, Picasa, Photos, and Windows.All these features are available for free. HD Flags Team is nonstop working hard on making this app better-quality and more valued for you. Please feel free to email us for any queries/suggestions /problems. If you have liked any feature of this app, do not forget to rate us on play store.