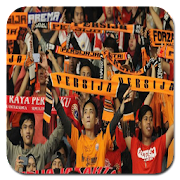 The Jakmania is a support group / supporters of Persija Jakarta soccer team that was founded Ligina IV, precisely December 19, 1997. The idea of ​​the formation of the Jakmania emerge from Diza Rashid Ali, manager of Persija then. This idea received full support from Jakarta Governor Sutiyoso. He wanted to revive football in Jakarta, which has long lost both the team and supporters.At first, members of the Jakmania are still a community of only about 100 people, with the board as many as 40 people. In the growing fame of Persija then comes the group - a group of new fans and community groups of fans Persija these new among others are lines Loud, Ultras Persija, Tiger Boys, Orange Street Boys, Jak Campus, Jak Angel, Jak Scooter, Jakventure, Jack Online, Jak on Air, Jak School, Jak Central Java, Jogjakarta Jak, Jak Land Pasundan, Jak Sumatra, East Orange and many more. And in order to keep the loyalty and solidarity of fans of all communities Persija fans that too has now joined under the auspices of an organization called The Jakmania.Applications and Key Guitar Songs Lyrics PERSIJA complete is key guitar-based mobile application that can easily be taken wherever. This application contains a collection of lyrics and guitar chord songs PERSIJA equipped with how to use the key.Applications and Key Guitar Songs Lyrics PERSIJA present to meet the needs of JAK MANIA and guitar player from beginner level up to senior level. With features that make it easier to play the guitar.Comments and questions please comment below or email us, do not forget the 5 star yaa..Terimakasih.