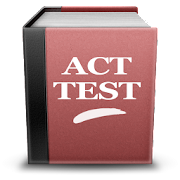 The ACT (American College Testing) is a standardized test for high school achievement and college admissions in the United States produced by ACT, Inc. It was first administered by Everett Franklin Lindquist as a competitor to the College Board's Scholastic Aptitude Test, now the SAT Reasoning Test. The ACT has historically consisted of four tests: English, Mathematics, Reading, and Science Reasoning. In February 2005, an optional Writing test was added to the ACT, mirroring changes to the SAT that took place later in March of the same year.ACT Test provides many training questions for people who want to get high score in ACT tests.ACT Test application also has many flashcards for you. Practice them everyday to improve your vocabulary.Thanks for using this app and don't forget put comments to help us improve this app.