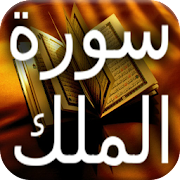 Al-Mulk (Arabic: سورة الملك‎, "Sovereignty, Kingdom") is the 67th chapter (sura) of the Quran, comprising 30 verses.The sura emphasizes that no individual can impose his will on another; he may only guide and set an example (67:26).HadithThe first and foremost exegesis/tafsir of the Qur'an is found in hadith of Muhammad and while hadith is literally "speech"; recorded saying or tradition of Muhammad validated by isnad; with sira these comprise the sunnah and reveal shariah and tafsir. Although scholars including ibn Taymiyyah claim that Muhammad has commented on the whole of the Qur'an, others including Ghazali cite the limited amount of narratives, thus indicating that he has commented only on a portion of the Qur'an. In either the case, higher count of hadith elevates the importance of the pertinent surah from a certain perspective. This surah holds special place in the sayings as well as practices of Muhammad, which can be observed by these related ahadith.Imam Ahmad recorded from Abu Hurayrah that Muhammad said,"Verily, there is a chapter in the Qur’an which contains thirty Ayat that will intercede on behalf of its reciter until he is forgiven. (It is): ‘Blessed be He in Whose Hand is the dominion. (Surat Al-Mulk 67)’"Muhammad said, ‘There is a surah in the Qur’an which is only thirty verses. It defends whoever recites it until it puts him into Jannah’Anas ibn Malik reported Muhammad as saying, “There is a Surah which will plead for its reciter till it causes him to enter paradise.”Muhammad said, ‘Surah al Mulk is the protector from the torment of the grave’Jabir said it was the custom of not to go to sleep until he had read Tabarakalladhi Biyadihil Mulk(Al-Mulk) and Alif Laam Meem Tanzeel (As-Sajda).He used to recite Surah As-Sajdah and Surah Al-Mulk (in Arabic) before sleeping.Abdullah Ibn ‘Abbas reported that Muhammad said, ‘It is my desire/love that Surahtul Mulk should be in the heart of every Muslim’Ibn Abbas said that one of Muhammad’s companions set up his tent over a grave without realising that it was a grave and it contained a man who was reciting the Surah Tabarakalladhi Biyadihil Mulk up to the end. He went and told Muhammad who said, ‘It is The Defender; it is The Protector which safeguards from Allah Ta’ala’s Punishment’Khalid bin Madam said about surat Al Mulk and As-Sajda that these two surahs will fight for their reciter in the grave and will say, ‘O Allah! If we belong to Your book, accept our intercession in his favour. In case we do not, get us obliterated. These surahs will spread their wings like birds and will save the person from the torment of the grave.’It was narrated that Abd Allah ibn Mas'ud said: Whoever reads Tabarakalladhi Biyadihil Mulk every night, Allah will protect him from the torment of the grave. At the time of the Messenger of Allah, we used to call it al-mani’ah (that which protects). In the Book of Allah it is a surah which, whoever recites it every night has done very well.Abdullaah ibn Mas’ood is reported to have said, 'A man will be approached in his grave from his legs and from his chest and then from his head. And each time this Surah will defend him by saying, 'You cannot do anything to him, he used to recite Surah Mulk'.'Abdullaah ibn Mas’ood further states, 'It is called, 'Al-maani'ah'. For it protects from the punishment of the grave.'