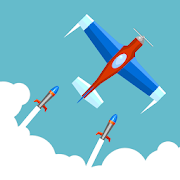 Missile Escape is a simple, fast paced and addictive 2D game where your mission is to dodge all homing missiles that comes towards you with one single objective: shoot you down!Use the simple control to fly your plane and avoid the missiles. Make them collide with each other and collect stars to increase final score.Missile Escape features: - Addictive arcade gameplay; - Two game modes: Survival and Time Attack; - Three control modes: touch, accelerometer and analog joystick; - Collect stars to increase the final score and unlock new planes and upgrades; - Make the missiles collide with each other to increase final score; - Survive as long as possible to stay at the top; - A pursuer plane will randomly appear to knock you down! Can you defeat him? - If one or both of the airplane wings has been hit, you can try to pick up the Tool power-up icon to fix your plane and win a second chance; - Collect Energy Shield power-up icon to increase your chances against the missiles; - Shoot flares to attract missiles; - Single engine planes, jet planes and spaceships available; - Compete with other players on Google Play Leaderboards; - 45 levels with 3 objectives each! Challenge yourself and try to beat them all; - Complete mission objectives to earn stars; - Free casual game!Missile Escape: Escape if you can!