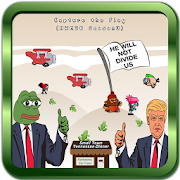 This game, Kek's Capture the Flag, is based on the world's greatest real-life game of capture the flag, ever played by Man... HWNDU Season 3! This small platformer, combined with a capture the flag twist, is but a small tribute to that momentous event in history! There are four characters included. Those being; the Donald, the Kekistani, the LOLCat, and Pepe...... Destroy the Normies, SJWs, and Commies, all while increasing your Meme Power! Enjoy the game, and Shadilay, my fellow Kekistanis!The great saga, began like this...In a wondrous time, not long ago, a man named Shia, decided to host a 24/7 live stream art installation critical of Trump in LA (called, "He Will Not Devide Us")... That is, until 4Chan/The Kekistani Army got wind of live stream. With out hesitation, upon hearing the news, in true Kekistani fashion (for Kek and country), the brave knights decided to invade Normie/SJW territory. Needless to say, the take over was a major success! In an effect to regroup, Shia shut down the live stream and moved the famous "HWNDU" flag to a remote "unknown location", with the intention of a new stream staying up for the duration of Trump's presidency.Now, the game was clearly on! Over night, a small 4chan prank had morphed into the world's biggest, and most intricate game of capture the flag, ever played!... Only the flag and the sky were visible, but the Kekistani Citizens, along with Kekistani's elite Knights Keklar, were able to figure out it's location by isolating ambient audio, analyzing wind patterns, constellations and flight patterns, and tracking Shia via social media tags! In just 36 hours, this epic battle of wit and will, was over (Praise Kek)! May Kek bless the power of your Memes, and Magic! An Old Knights Keklar Prayer: "Now I lay me down to rest, I pray to Kek my Memes protect. If I should fall before I wake, I pray to Kek my Memes to take."