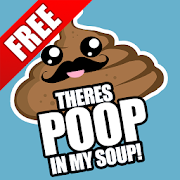 Poop In My Soup

Have you ever wanted to poop on people but were too shy to just go for it? There's Poop In My Soup let's you do just that, poop in soups, poop on people, poop on poodles, poop anywhere you please, from the streets of New York to Paris to Beijing. Poop on everybodyFeatures:* Check off your to-poo list* Poo on people of New York!* Play as Donald Trump and poo on china!* Play as a famous Youtuber and drop a deuce on the streets below* Unlock the Poopin bomb* Unlock Poo fireworks* Unlock the Paris.* Unlock ancient china and poo on its people Happy Pooping!