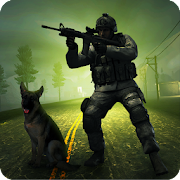 Gear up with all your fps sniper skills to survive in intense zombie action game The Walking Stranger: Dead Things Don't DieIt’s a true combo of classic zombie war game made more thrilling and intense for gamers. A failed experiment leaked hazardous mutating infection into earth’s atmosphere. Now the world is facing zombie phenomenon! Everything is blanketed in darkness as terrifying nightmare comes to life! Citizens have been infected by this virus and have already mutated to zombies! They have taken over the whole city in this 3D world of action-adventure survival horror game!As most skilled agent of a secret military ops team with highest ranking name black you must save citizens before this zombie infection spreads!Good news is there is a secret formula left by the scientist in his lab! Leave no stone unturned to collect all the ingredients to complete your mission objective in this immersive gaming world! Using your stealth skills as a pro fps gamer, explore whole environment for these unique items! Survive the endless zombie waves at every turn in this suspense filled action fps horror game to obtain these medicinal items! They are evolving fast and becoming more dangerous in this post-apocalyptic fps environment! Take down whole crowd in this war against monstrous zombies. Clear all roads leading towards the lab using lightning-fast top military fps agent action skills in this free online action-adventure survival horror game. To assist you in surviving this fps war in combat, gamers can use long-range weapons, such as sniper rifles, shotguns, and short-range weapons such as handguns. Unique features such as keeping players thirst and hunger in check are also included to make this game more realistically intense! Collect items for medicine, ammo and eating items by scavenging throughout the environment.This gameplay features multiple objective based immersive levels.Free to download and play, has amazing 3D graphics with advance realistic fps physics for better player experience.